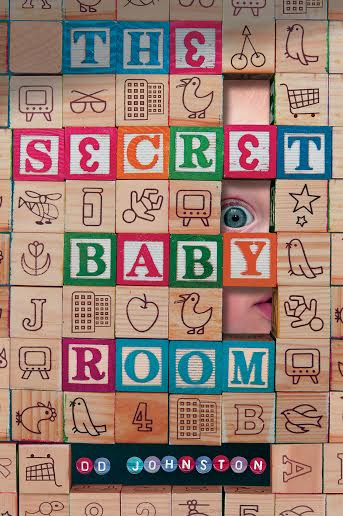 How to design a book cover

So how do you design a book cover? Here’s the striking new one for The Secret Baby Room by D.D. Johnston, & the story behind it.

The first choice to be made in cover design, of course, is the basic one: find yourself a good designer. Publishing is a partnership. A writer starts solo, but once there is a text other artists bring fresh skills to the process. Editing is its own art, typesetting another, and cover design another. Everybody responds to that initial creative input of the text, and joins in the dialogue which will form the next wondrous transformation: turning the text into a book.

We started with a search through our own photo files, and the huge range of stock in photo libraries, typing in key search terms. The title was then placed on a whole rack of photos, images of  derelict prams and dolls and the like in abandoned room. This is something like the screen-test for an actor; a picture might be striking, but will it look good as a book? An early version of this cover was more pure ‘crime’ – a pink haired doll on a worn out green carpet tile, smiling but missing one eye. Her eyes were held wide. Pick me up and take me home, take care of me … that was the subtle message we were looking for.

However Barbican Press’s mode is to give authors and illustrator free rein, everybody sharing a creative discussion – and we could sense they wanted to go a step further. And that step was away from using a photo; more originality, with the added bonus of saving us a photo library fee.

First we ordered a stack of children’s bricks. And those bright plastic letters that can be strung on a piece of string to form a bracelet. Jason Anscomb, the designer, has a particular flair for typography. 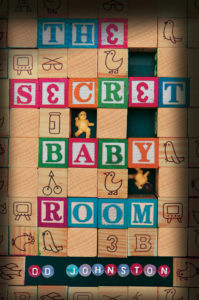 Then Jason Anscomb (who’s done all our covers) at Rawshock Design got to work – with camera and pen and eye and all. 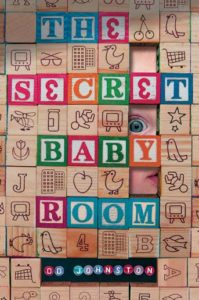 started appearing on the bricks. Some holes appeared – forming a notional tower block. (The Secret Baby Room starts with the spying of a woman breastfeeding a baby on the eighth floor of an abandoned block set for demolition.) Tiny plastic babies, the sort bought in for baby showers, waved and tubbed in two of the spaces.

And then came the idea of a baby looking out from behind the blocks. The final version (top) dropped a few of the drawn pictures, and fine-tuned the shading.

The result? Spooky – and just maybe something you want to take care of? A reason to pick up the book and start to read, at least. Such is the hope.