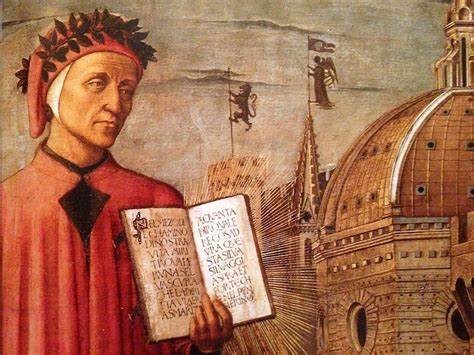 Dante was born in Florence in 1265 into a family in modest circumstances, though he claimed noble origins for his forebears. In
his youth he became one of the leading lyric poets in Italy, along withhis friend Guido Cavalcanti. In his late twenties Dante wrote the Vita Nuova (“New Life”), an autobiographical prose narrative that served as a frame for poems written earlier about a woman named Beatrice Portinari. He says he met her when they were both eight years old and she first greeted him in the street nine years later, transforming his life. Although, according to him, they had no actual relationship over the years beyond exchanges of greetings, she became his amorous obsession and his muse. When Dante was 20 he married Gemma Donati, a woman from a lesser branch of an important family, with whom he would have four children. Five years after his marriage Beatrice died. Following her death, Dante entered into intensive studies in philosophy and theology and got involved in politics. Florence, like other Italian cities, was riven by violent factional strife. The long-running struggle of the Guelfs (allied with the pope)
and the Ghibellines (allied with the emperor) had ended with the Guelfs victorious. But Florence was then plagued by a violent struggle between the Black and White factions of the Guelf party; Dante was allied with the Whites.

In 1300 he was serving a two-month term as one of the seven priors who administered the city when the struggle
came to a boil. The priors exiled the leaders of both parties. After his term ended, the Whites were recalled from exile, which antagonized the pope, who called in a French force to restore the Blacks to power. When this happened Dante was on an embassy to Rome to dissuade the pope from this course. He was sentenced in absentia to exile and then to death and he never saw Florence again.

He spent almost 20 years in exile, partly as a guest of the lords of Verona and Ravenna. He died after returning from an embassy on behalf of the latter in 1321, when he was 56. In exile Dante wrote most of his works, including an unfinished treatise of moral philosophy, an unfinished work on linguistics and  literature, a book of political theory and open letters on the international political situation. In the last 15 years of his life he wrote his masterpiece, The Divine Comedy, which begins in autobiography and
becomes by its end the single most universal and transcendent work in Western literature. T.S. Eliot said, “Dante and Shakespeare divide the world between them. There is no third.” 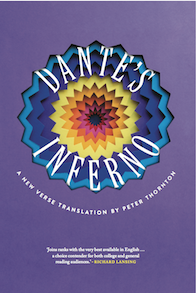