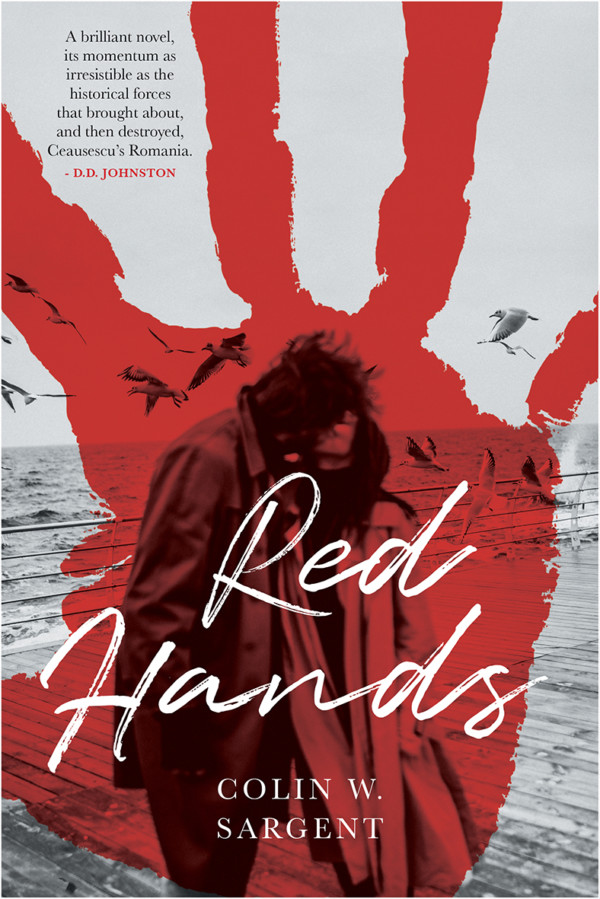 Bill Barry, who reviewed The Boston Castrato for The Maine Sunday Telegram, offers this bright review of Colin W. Sargent’s Red Hands, with its whole array of wider reflections.

Taken at face value, Red Hands is a unique insider’s view of the rise and fall of the dystopian regime of Romania’s Nicolae and Elena Ceausescu. It is also a love story told to writer Colin Sargent by the dictator’s unloved daughter-in-law, Iordana Borila Ceausescu, during her exile in Old Orchard Beach, Maine, after the bloody 1989 revolution.

Termed a novel, in the Truman Capote fashion, Red Hands amplifies the story of Iordana, her husband Valentin, and their son, Dani, giving the reader a clear view of privileged life in Romania and their view of the communist east and capitalist west. After her marriage to Valentin, Irodana and her family lived a life of uncertainty, privileges taken or granted by the dictator’s whims. Thought control by the leaders of the party and government was pervasive, with brutal focusing on the lowest workers to the highest government officers. Nicolae and Elena ruled as harshly and effectively as any dictators of the 20th century and yet they were seen as liberal or at least progressive by western governments. How this Potempkin Village facade was achieved is clearly spelled out.

Little things like a visit to the countryside in a big but dusty official car on which someone had written “wash me” caused the vehicle to be washed by frightened villagers while Iordana was visiting inside. The fear crossed the land was made palpable. Nobody dared to say anything that might upset the Ceausescus. As a student of history, I have always wondered how Hitler was able to come to power in an educated nation. Indeed, I studied the subject with a professor who had served in the Hitler Youth Movement. I was still somewhat incredulous. Reading Red Hands during the Trump show answers much.

Both Ncolae and Elena began as committed communists who fought the fascists in Spain and the Balkans. They were true believers–part of the old guard that rose to rule Romania with Gheorghiu-Dej after World War II as part of the Eastern Bloc. In their rise to the top they became worse than their fascist or royalist predecessors, more materialistic but in a less conspicuous way. The joke was that everyone knew what was going on but nobody dared to speak up.

Young people at the top had access to western cinema and films such as Lawrence of Arabia and To Kill a Mockingbird, as well as the music of Bob Dylan and Leonard Cohen, but were not allowed to travel. They were privy to views of capitalism and life in Romania but expected to accept the party line even as the economic and social situation spiraled down. For Iordana there was not only the general fear but specific threats from her mother-in-law about the way she lived and worked. She experienced pressure and self-loathing. Few books provide such insight.

I would recommend that readers consult Thomas E. Ricks’s book Churchill & Orwell: The Fight for Freedom (Penguin Press, 2017) to gain a universal view of the clash of communism and capitalism going back to the roots of the Spanish Civil War. Orwell, an English writer, fighting Franco’s Fascists, was shot through the neck in combat but ended up with a price on his head by the Stalinist who forced him to leave Spain.

The whole idea of fake news and double-speak followed Orwell, who wrote, “Political language is designed to make lies sound truthful and murder respectable; subsequent mouthings of our time including pacification, elimination of unreliable elements, and friendly fire corrupt language and ideas.” This approach to life by leaders and acceptance by the people is seen throughout Red Hands as a plausible, horrid way of life which leads to a terrible conclusion.

Taut and vivid writing, no wasted words, makes for a fast-paced, heartfelt book, which makes the reader squirm and stagger as conditions and fortunes change. Red Hands is a book for our time and all times–the fate of the individual in distressing social and political times.