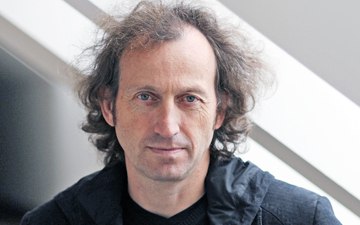 The Jewish Czech writer, publisher, traveller and journalist Martin Vopěnka studied nuclear and physical engineering at the Czech Technical University, but only because the communist regime prevented him from studying in the humanities. Perhaps because of his Jewish origin he views the contemporary world with caution, sensitivity and scepticism. Vopěnka seeks inspiration in the mountains

(for example, he visited Antarctica, Chile, Argentina, Kirghizia). He’s the author of 6 novels for adults and three novels for young people, some published abroad. The themes he explores in his books go beyond the local themes of much Czech literature. He contributes polemic articles to the national daily paper MF Dnes. In 1997 and 2012 he was a guest at the Prague Writers Festival. He is a member of the Czech PEN Club and chairman of the Association of Czech Publishers. He lives in Prague with his wife Anna and four children.

His novel Pátý rozměr is being translated from the Czech for Barbican Press by Hana Sklenkova. As The Fifth Dimension, it is scheduled for publication Autumn 2014.